They use the neuromuscular reflex tests and body access points to access the body's bio-computer, the nervous system, and read the functionality of its programs.

We recognize that certain conditions produce predictable reflex subluxation patterns in the spine.

Corrections are usually made by means of respiratory spinal treatment of these patterns, or by either soft tissue or joint adjustment.

TBM may sometimes look like magic to the uninformed, because when the right thing is done to the right body part, at the right time, seemingly, miracles happen!

But, even though it appears so incredible, it is eminently repeatable, teachable and learnable.  The procedures are repeatable from practitioner to practitioner and can correct  physiological imbalance established from in-utero life onward.

For those who need to know which nerve pathways are being used , here they are:
The cornerstone of IBD is the muscle test in which a client’s normally strong muscle (the “indicator” muscle) becomes weak when the examiner touches a hand to the reflex zone related to an ailing or dis-regulated part of the body. This approach is a simple but effective way to assess the ANS. It has long been demonstrated that organ dysfunction, injury and visceral disease change the electrical properties of the skin, as measured by altered skin resistance. (1), (2), (3), (4)


The testing method used with IBD is based on the following neuro-physiological principles:

1) The skin’s normal electrodermal activity is always measured as a negative polarity, with the skin of the palms of the hands and soles of the feet being 10- 25 millivolts more negative than the rest of the skin.
2) The skin over a diseased area or injury has a positive charge.
3) A “capacitor” is formed when simultaneous contact is made between 1) and 2) above, based on the physics principle of two parallel plates (hand and skin) having the ability to store an electrical charge.
4) The skin is the largest ANS controlled “organ”. Reflex zones have been established for various tissues organs and functions on the surface of the skin.
5) Unmyelinated autonomic and sensory fibres (80% of all ANS fibres) innervating the skin’s surface stimulates enough electron flow to produce this microcurrent between hand and skin
6) This microcurrent then excites the nerve cell bodies of the posterior horn of the spinal cord.
7) Nerve fibre connections are then formed with the sympathetic motor region of the lateral horn and the alpha and gamma motor neurons of the anterior horn of the spinal cord.
8 ) These sympathetic motor fibres next innervate the intrafusal muscle spindle fibres, and the alpha and gamma motor neurons innervate the extrafusal fibres, which are directly connected to the Golgi tendon organs (GTO’s) of the muscles. The GTO’s are responsible for muscle tone, and protect a muscle from tearing.
9) The sympathetic innervation of the muscle spindles is responsible for an increase or decrease in “local” muscle tone, as well as remote muscle weakness over a number of spinal cord segments. See (7) above. Put another way, a weakness over the kidney area can trigger a weakness in the psoas major muscle of the leg because it is on the same energetic “circuit” as the kidney.
10) Impulses reach the spinal cord within milliseconds. These also communicate with central nervous system centres as well. (e.g. the reticular activating system and cerebral cortex), This causes weakness of an “indicator” muscle via descending inhibitory nerve pathways to the motor neurons of the anterior and lateral horn.
11) If a previously strong “indicator” muscle becomes weak, a functional ANS disturbance is said to be present, also known as an “interference field” or area of “therapy localization”.
12) The appropriateness, priority and proper sequencing of the treatment phase of the Non-linear protocol is determined via the IBD principle of “two-pointing”. That is the strength of the “indicator” muscle changes polarities again (e.g. from weak to strong) when the substance which will correct the ANS disturbance is introduced into the client’s energy field.

The validity of the testing is influenced by the amount of effort and focus on the process by the patient as well as the doctor. A sloppy test can only provide a sloppy result. So it is very important to apply focused attention to any of the directions given to you, as your ability to comply with those directions will determine the usefulness of the results obtained by this method.
Back to the top


AS A MATTER OF INTEREST

Checking Blind Spots to see if there are neurological changes
The claims of both TBM and IBD are that the activation of the appropriate reflex does cause a change in the activity or the nervous system which in turn should improve the function of the body. So as a matter of interest, I did a blind spot test to see what sort of changes are in fact able to be brought about on a "brain level".

We all have a blind spot in each eye. The blind spot represents a part of the eye where the optic nerve joins the eye ball itself to the brain. In this portion of the eye there is no retina. So you can't see at this "spot".

In an ideal state, the blind spot should be as small as possible. That way we have a more complete view of the world around us. By mapping (measuring) the blind spots, we can assess the functioning of the brain circuitry related to vision. Blind spots are never perfectly symmetrical even under the most ideal circumstances, since we all have some variation between our left and right sides. The same is true of our eye sight as well.

So what I did to test this is to do a blind spot mapping which resulted in the following chart:


Then I tested a reflex on the body that caused a weakening of a previously strong indicator muscle.

Then the appropriate reflex points were stimulated as indicated by both IBD and TBM systems (the treatment phase)..

After the treatment phase, I then re-tested the blind spots which resulted in the following "map".

I have found using these reflexes are helpful, quick to test, quick to activate the reflexes and are at times the only thing that will bring about a change in a faulty body function.

And here is another view of TBM: 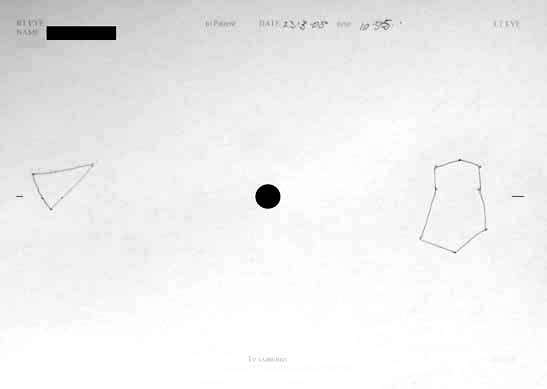 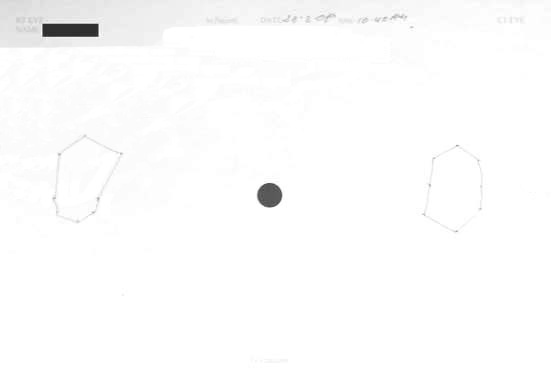 Links for this page